Lorenzo was diagnosed with Hypoplastic Left Heart Syndrome (HLHS) during my pregnancy.  This is a very serious and rare congenital heart defect. There are only about 1000 babies in the entire US that are born with it each year.   Our care team in Maine referred us to Boston for treatment during pregnancy once discovering that Lorenzo had HLHS.

Going down to Boston we thought we were prepared for his surgery and stay, as we were so informed prior to his arrival.  But you are not actually ever prepared for something like that. We knew about his open heart surgery but that didn’t make it any less stressful. We were not prepared for his other diagnoses. During his first few days of life he underwent his first open heart surgery, and within a few weeks was later diagnosed with Super Ventricular Tachycardia (SVT), Central Sleep Apnea, a Hypo-mobil vocal cord and a liver issue, in addition to his Hypoplastic Left Heart.

We had a lot of fears coming to Boston. We knew we would be in Boston for a while (2-3 months). It was nerve wracking essentially picking up our life and moving out of state. One of our biggest fears was finances and where we would stay, only one parent could stay in the hospital with Lorenzo.  We were fearful of being home sick, wondering how we would eat meals, and not having all the essentials we would need, and if we would be safe. The Ronald McDonald House at Boston Harbor helped with those fears and we were so relieved once we got in for housing. Not only did it provide us a place of security to stay during our stay while Lorenzo was admitted at the hospital, but it was also so close to the hospital as well which helped some of our fears in worrying about him knowing we were so close to him at night. The apartment was stocked with toys, books, and games for both adults and kids.  It also was stocked with supplies to cook with and some essentials. We had a place to do our laundry, cook, sleep, relax and wash up all at once. We felt safe and supported at the Ronald McDonald house at Boston Harbor.

The Ronald McDonald House at Boston Harbor was a true blessing. We felt so welcomed and were truly taken care of. We were always asked if we needed anything and if we wanted to participate in the meal delivery from volunteers (which we did, which was so helpful and nice) and we were pleasantly surprised to see a frozen chicken pot pie already in our freezer (I love chicken pot pie it’s my favorite!) we also really enjoyed the Muffins on Mondays. We even received a volunteer meal the day we headed home which was packed up for us to take on the ride along with a pot pie to take home. The Ronald McDonald House at Boston Harbor really helped us through that stressful time and was a true blessing for us that we will forever be grateful for.

Saying we enjoyed staying with the Ronald McDonald house is an understatement. Honestly it meant so much for us and we are so blessed and lucky to have been able to stay there and meet the people we met, and everything that came with staying at the Ronald McDonald House. It helped ease some anxiety, and helped with finances, and truly gave us a place for comfort, security, and to call “home” for the 2 months we were away from home in another state. 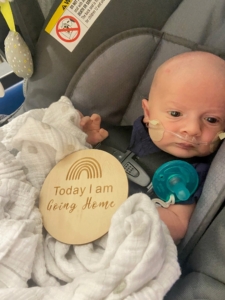 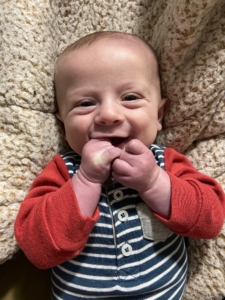