When 20 doctors and nurses are crowded into the delivery room, you know something’s wrong.

Maureen was about to give birth only 23 weeks into her pregnancy. Her son Francis was born weighing just 1 lb. 9 oz., with only a 17% chance of survival. They rushed him into the neonatal intensive care unit (NICU).

Four days after giving birth, Maureen left the hospital without her son.

She was physically, mentally, and emotionally drained. “I couldn’t imagine leaving Francis’ side,” Maureen remembers. But she and her husband, Jeffrey lived an hour away from the hospital. How could

she stay with her baby? The logistics were impossible. Thanks to supporters like you, the Ronald McDonald House of Providence became home for this family.

At first, Maureen was uneasy — “I wasn’t sure how I would feel living in a community with strangers, while trying to navigate being a mom to a micro-preemie.” But she was exhausted. They were both overwhelmed. They had no other options. So they decided to try it for a weekend.

“I remember walking through the front door, looking at my husband with a smile,” Maureen says. She knew immediately, they were home.

What they didn’t know was that our House would be their home for more than a few days or weeks.

Their baby would be in the NICU, fighting for his life, for four long months.

Maureen remembers “the immense amount of peace we felt while entering the House. We knew this was the perfect place to be while going through such an intense time. We found comfort being surrounded by parents and families that were on a journey similar to ours.”

It only took five minutes for Maureen and Jeffrey to walk from their second-floor room at our House to Francis’s second-floor room in the NICU. Knowing they were so close “made it easier to leave him in the evenings,” Maureen says.

Maureen and Jeffrey were able to be at their baby’s side through the entire ordeal, which may have saved his life. The chief NICU doctor told Maureen why he thought Francis was “thriving and doing extraordinarily well” … it was “because I was with him all the time.” Maureen chuckled; she thought the doctor was perhaps making a bit of a joke about her long hours in the room.

No, he insisted, “it really was my presence that made the difference for Francis. The Ronald McDonald House played a very important role in Francis’ journey.”

And his journey finally took him from our home, to his. Today, his mother reports, Francis at 2 years old is “a thriving, adventurous, independent, loving, silly boy — who has overcome many obstacles, and is enjoying life!”

Check out the Azize Family documentary “Just Keep Swimming” to learn more about their inspiring journey. 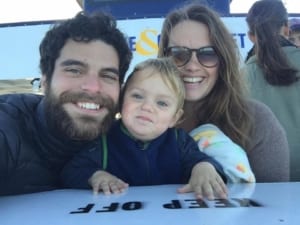